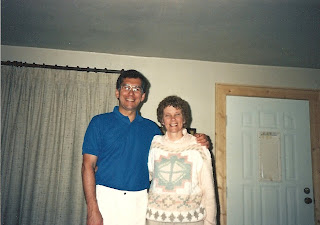 Bill and Roxy in their first home in Ladysmith. Someone very short was taking this picture!


New Quiz: Idolatry
Answer the questions with names from this list:

1. Which king, when he became old, was drawn into idolatry by his wives?
2. Which king removed his mother from her throne because she had made an idol in a grove?
3. When a bronze serpent, erected by Moses, became an object of idolatry, which king destroyed it?
4. Who placed a great golden image on Duras' plain and commanded his subjects to fall down and worship it at the sound of music?
5. Who cunningly assembled all the Baal idolators in their temple and then had them slain by eighty men?
6. Which wicked king set up altars for idolatry in the house of the Lord, made his children pass through the fire, and used witchcraft?
7. Which silversmith, who made shrines for Diana, started a riot among other silversmiths because Paul was trying to stop the worship of Diana and put a stop to their craft?
8. Which king, to make idolatry more convenient, set up two golden calves in Bethel and Dan, because, "it is too much for [them] to go up to Jerusalem"?
9. Who used golden earrings, donated by the people of Israel, to make a golden calf for them to worship?
10. Who proved to the people the existence of the true God by winning a contest over the prophets of Baal?

Answers and a new quiz will be posted next Thursday!

Posted by TheSpokenWord at 6:10 PM