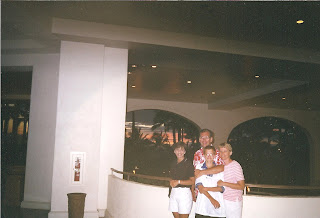 Robin, Bill, Roxy and Nick after a sunset walk in Maui.

1. Which man was so frightened by a dream his hair stood on end?
2. Who was "greatly afraid and distressed" when he was about to have a reunion with a brother he had wronged, and learned his brother had 400 men with him?
3. Which king, at the sight of a vast army of enemy Philistines, was "afraid and his heart greatly trembled"?
4. When he saw an angel ascend in an altar's flame, who fell face downward to the ground in fear?
5. At the sight of handwriting on a wall, who became so frightened his knees knocked together?
6. Who, while a passenger on a ship, was tossed overboard when sailors became frightened during a "mighty tempest in the sea"?
7. Who was frightened at the sight of a man who came down from a mountain with a shining face?
8. Who tried to walk on water, but was terrified at the sight of high waves and began to sink?
9. What band of fleeing people "were sore afraid" at the sight of 600 Egyptian chariots coming in pursuit of them?
10. Which three men "were sore afraid," when a voice, coming out of a bright cloud, said, "This is my beloved son, in whom I am well pleased"?

Answers and a new quiz will be posted next Thursday!
Posted by TheSpokenWord at 3:12 PM