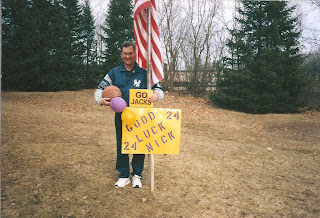 In 2003 the Ladysmith Lumberjacks won the Wisconsin High School Division 3 Boys Basketball State Championship. Nick was a Junior on that team. There were seven Seniors and three Juniors on Ladysmith's one and only team State Champion.

Shalom,
Today we are going to talk about the Minnesota State High School Boys Basketball Tournament. There are 429 boys high school basketball teams in the state of Minnesota. These teams are divided into four divisions (4A, 3A, 2A and 1A). The 64 largest schools in Minnesota are in 4A. The 64 next largest schools are in 3A. There are 130 schools in 2A and the smallest 171 schools are in 1A.
Nick coaches at Blaine High School. Blaine is one of the 64 largest schools in the state of Minnesota (they are the 7th largest). The 64 schools in 4A are divided into 8 sections. There are 8 teams in each section. Blaine is in Section 7. The Section 7 tournament began last night with Blaine defeating St. Francis 63-53. On Friday Blaine will play Cambridge-Isanti at 8:00 pm in the semi-finals. The championship game in Section 7 will be played on Wednesday, March 19, at 7:00 pm. The winner of the Section 7 tournament will represent Section 7 in the Minnesota State High School Class 4A Boys Basketball Tournament. The 4A tournament begins on Wednesday, March 26, at 10:00 am at the Target Center in downtown Minneapolis. The semi-finals will be on Thursday, March 27. The finals are scheduled for Saturday, March 29, at 8:00 pm. GO BLAINE BENGALS!!!!
Bill
Posted by TheSpokenWord at 11:42 AM