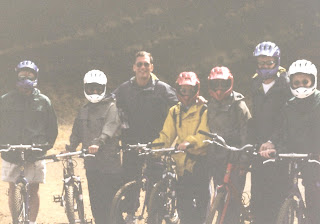 The Novak and Swoverland families rode bikes down Mt. Haleakala in Maui.

In the late 1950s the Milwaukee Braves were the closest team to Minnesota. The Braves won the World Series in 1957, defeating the New York Yankees. The following year they lost to the New York Yankees in the World Series. My favorite Milwaukee Braves were Hank Aaron, Eddie Mathews, Johnny Logan, Del Crandall, Warren Spahn and Lew Burdette. The Braves left Milwaukee after the 1965 season and went to Atlanta.

The New York Yankees and the Milwaukee Braves were and are my two favorite baseball teams. Tomorrow we'll talk some football with the World Champion Baltimore Colts.

Bill
Posted by TheSpokenWord at 12:23 PM