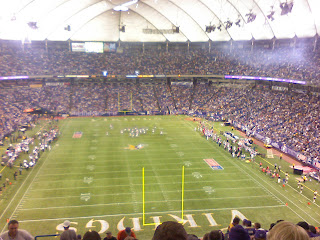 A view from the Metrodome for Sunday's home opener against the Atlanta Falcons. 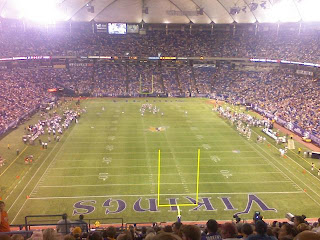 Another Metrodome view as the Vikings and Falcons battle in their first regular season game. 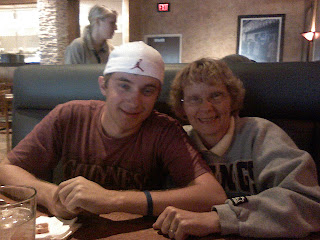 Nick and Roxy at our post-game restaurant, Granite City in Roseville. 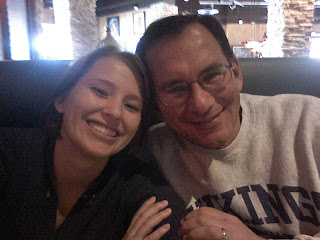 Kristine and Bill, obviously happy after a BIG Vikings win.
Hi,
Tuesday is family day on my blog. On Sunday Roxy and I made the drive to the Twin Cities. After picking up Nick at his house near the Hamline campus, we drove downtown to Minneapolis to meet up with Kristine. It was a beautiful sunny day as we walked a few blocks from our car to the Metrodome for the Vikings home opener against the Atlanta Falcons.
We had a great time at the game as the Vikings won 24-3. Kevin Williams and Antoine Winfield returned interceptions for touchdowns. Rookie running back Adrian Peterson caught a short pass and turned it into a long touchdown run and Ryan Longwell kicked a 49 yard field goal. The Vikings defense recorded 6 sacks of the quarterback. The Vikings only had 1 turnover and 4 penalties in a solid opening day win.
The opening day crowd was loud and supportive and it was a great family experience. After the game we drove to Roseville, Minnesota, to one of Kristine's favorite restaurants. I had a fantastic London Broil as we celebrated and enjoyed one another's company.
Nick is starting his second week of classes at Hamline University. Kristine and Brian are coming to Ladysmith to spend the weekend. Roxy and I are looking forward to playing that "Dynamic Duo" in doubles at the local tennis courts.
Have a great day,
Bill
Posted by TheSpokenWord at 8:30 AM