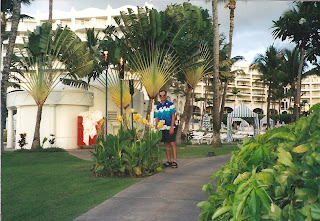 Bill at one of the hotels along the Wailea walkway in Maui.

The final team in my sports priority interest list is the University of Minnesota Golden Gopher football team. My interest began at the last game of the 1959 season. A heavily favored Wisconsin team snuck past Minnesota to earn a spot in the Rose Bowl. I watched the game on TV with my dad and uncle. The following season, my dad, Uncle Ludvig, cousin Jimmy and I attended the Minnesota/Illinois Homecoming Game. It was the first Golden Gopher game that I ever went to. Minnesota won 21-10. They went on to win the National Championship and go to the Rose Bowl for the first time. Tom Brown, guard, was named All-American.

The following season the Gophers, led by All-Americans Sandy Stephens, quarterback, and Bobby Bell, tackle, won the Rose Bowl 21-3 over UCLA. I attended the Minnesota/Michigan Homecoming Game with my dad, Uncle Ludvig and Uncle John. The Gophers scored a touchdown in the last minute to win 23-20.

In 1962 the Gophers, led by All-American Bobby Bell, were robbed of a Big Ten Championship when they lost to Wisconsin in the last game of the season. Even President John Kennedy admitted that a "roughing the passer" penalty against Bell was a blown call.

These winning and exciting three years of Minnesota Golden Gophers football made me a fan for life.

Posted by TheSpokenWord at 4:06 PM